Through the study of Chinese painting, Bi Rongrong developed her painting ability, and in the Netherlands she studied painting in a contemporary art context. This, together with  the interest in architectural spaces she developed at the University of Pennsylvania School of Design, gave Bi Rongrong more freedom in expressing the landscapes and cityscapes around her in rich forms. Combined with a new exhibition environment, these materials are discussed within the context of the artist’s personal life. This is how compositions of colors and spatial structures develop in Bi Rongrong’s distinct style. 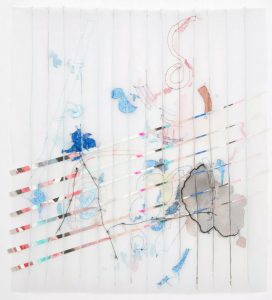 Chen Xingye uses contemporary expression to describe his imagination for the primeval as a modern person, but also for the future. The exaggerated muscular body is undoubtedly the totem of primitive power, and whether there is same relationship between the primeval under the illusion of power and present? These imagined images reflect our self-examination and the balance between ourselves and present environment, reality and nihility, past and future.

Fang Di graduated from Guangzhou Academy of Fine Arts in 2010 and got an MFA from Maryland Institute College of Art in 2013. He currently works in Shenzhen and Port Moresby (Papua New Guinea). Ye Fu was an early experimental film by Fang Di. Through a 16mm film camera, the artist showed us a very ambiguous image. The performer who cancel the gender identity, also indicates that the current social trend of thought: people pay more attention to the construction and exploration of individual identity. 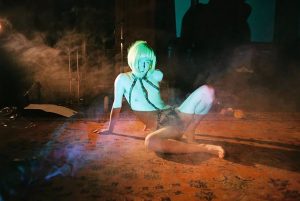 Jin Haofan was tired to construct figure and scene constantly to show the anxiety and self-doubt through strange scenario from the early time. In his recent works, He try to reduce too much imagination and want to get ride of his personal feelings of the one-sided narration, instead of concerning the imagination of “emotion”, which has been disturbed by all kinds of troubles and problems. 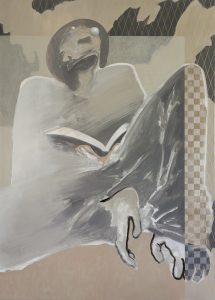 Lin Tianmiao was born in 1961 in Taiyuan, Shanxi. She graduated from Fine Art Department, Capital Normal University in 1984 and Art Student League, New York in 1989. She was one of the most important representative artists of Chinese contemporary art. In this exhibition as a part of the installation work, the thermometer has its specific features and properties; human bones and bones of animal all have value of ‘life’. When bones and tools are “grafted” together, their original features and properties are recombined, as well as creating new cultural value, which also initiate new social thinking.

Mu’s often abstract artworks are the result of a process of reflection that associates today’s existence. Through an almost synesthetic approach, Mu visualizes the paradoxical co-existences between insignificance and value, to dispute the physical understanding of reality and its moral conventions while facing the intensified ideological confusion and identity struggle at present time of globalization. Critical social events inspire Mu as a catalyst rather than a subject – they accelerate the revelation of the intertwined relationships between the stories surface (the image) and its concealed cause (the dynamical truth). Through art making she wants to revive a mind space exploring the, in fact, none-hierarchic and ever circulating being of things as a complex unity. 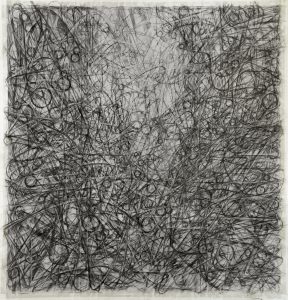 At the first look on Xiao Jiang’s work, you will be encompassed with the sharp atmosphere. Something are left by his work unsaid, expressing the power in a silent way.Xiao Jiang’s works has drawn its materials from the episode of the movie and real life which is so familiar to people that is easily ignored. Under artist’s unique perspective, they are cut out and recombined. Xiao Jiang takes the inspiration from the reality but structures an absolute fantasy world, leading the audience to dislocated visionary feelings