OCAT Shanghai is delighted to present the Term 2 of the C-Space Project – Liao Fei | Is everything a contingent occurrence? From January 23 to March 28, 2021. Shifting from questioning the nature of “matter” to the dualistic system of human cognition, then to geometric mathematical experiments, Liao Fei’s art practice deduces the existence and operative patterns behind the “material world” of our perception and experience through abstract and sensual art scene expressed in common mathematical and physical logic. For the fundamental concepts and axioms of everyday life, we rarely enquire about their reality or even notice them at all, and such empirical perceptions fall right into a vague superimposition of assumptions. To hypothesize the existence of a straight line would require the premise of “even and uniform conditions of time and space,” only then would one get out of the loop of a circular definition; when identifying the material properties of light, only by assuming that it is within the macroscopic system of classical mechanics, can we classify it as a substance composed of particles. Confronted by the indeterminacy of human perception and experience, Descartes expressed his bias for algebra and geometry. According to Descartes’ conception, these two disciplines were only relevant to pure and simple objects and deduced through rational proofs, to the extent that they could not be the assumed basis of any indeterminate experience. Outside the perspective of instrumental rationality, geometry takes a break from superfluous ideas and returns to the analysis and induction of basic geometric figures, thus building long chains of reasoning to reach conclusions. The “rational perspective” and “basic tools” in geometry constitute Liao Fei’s unique creative language. In his own words, “As opposed to ‘soft materials, ”ambiguous expression’ and ‘personal emotion,’ I prefer ‘solid material,’ ‘straightforward expression’ and ‘stoicism.’ For both ends, I am more vigilant of the former.” Liao Fei, Even Mirror series, in the artist’s studio 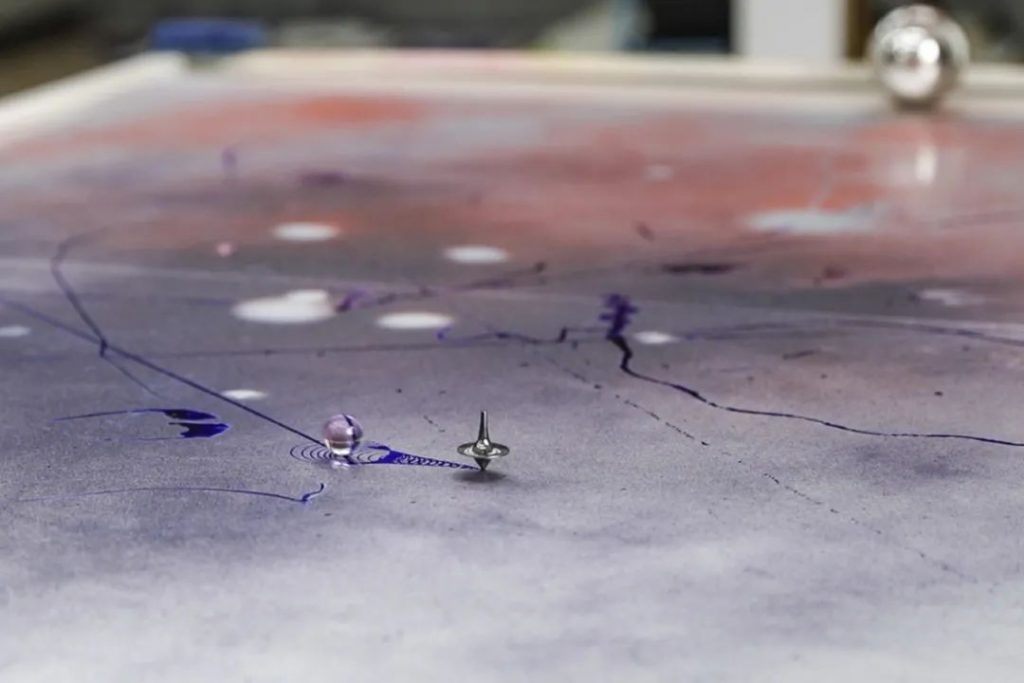 Liao Fei, Trajectory of Matter series, in the artist’s studio

The exhibition Is everything a contingent occurrence? will present four groups of works on paper and installation – documenting the state of matter in physical space. The Even Mirror series is based on investigating the symmetry of matter. The spatiotemporal balance of celestial systems in the macrocosm to the rotational and translational symmetry of crystals in the microcosm naturally presents as a perfectly ordered symmetrical structure. However, the imperfect spontaneous symmetry breaking goes hand in hand with it, which leads to the qualitative properties and multiple anomalies of matter. Liao Fei adopts simple paper and ink materials for Even Mirror to deduce the principles of symmetry. The dried paper records the state of matter as it is folded and compressed in space. Trajectory of Matter incorporates elements of material movement from repeated ink-jetting on the paper, in addition to the spontaneous motion of objects such as glass balls, gyroscopes, and human intervention, leaving random overlapping and obscuring traces. Around the workbench on which Trajectory of Matter is executed, Liao Fei set up the parameter for this motion experiment, so once the ball is thrown and fell freely, leaving a trajectory of movements, does that qualify the thrower the impetus of such motion? Where does inertia come from? When the matter is set into motion, doubts about nature’s established axioms begin to emerge again. Area Materials presents a more random distribution of pixels. A piece of paper is folded into a three-dimensional structure, and the dots are hand-painted after the ink-jetting is completed. The multiple folding and coloring and the episodic nature of the mixed ink spraying process afford Area Materials a sense of order and uniformity in the disorder. Area Marking is inspired by the details of the unconventional structure of the current exhibition space. Liao Fei will create a specific work based on the site, using pencil as the only tool to sublimate the entire physical space into a conceptual space of abstraction. Existing spatial markers and human interventions will blend from the artist’s repetitive overlays of graphite marks, flattening the asymmetry of the space and dissolving the uneven obstacles on the ground, while drawing a parameter of human activity, delineating a section of inaccessible spatial properties in the void. Is everything a contingent occurrence? All of the experimental processes have been set up by the artist, the possibilities for natural occurrence has been confined by its conditions prior to the artist’s setup, as we will discover through observations. In this regard, Heisenberg once said: “What we observe is not nature itself, but nature’s response to our method of observation.” Given our limited knowledge of nature, probability becomes a quantitative description of random occurrences, meanwhile, a perceptual expectation for answers of causality slips through subtly.

Liao Fei was born in Jingdezhen, China, and currently lives and works in Shanghai. Liao Fei’s artistic practice is propelled by the quest to define matter and discover the self, who hopes approaching matter through repetitive yet essential experiments. Intrigued by the notion of dualism and contradictory perceptions, Liao expands his experiments’ parameters beyond the scale and system of duality.