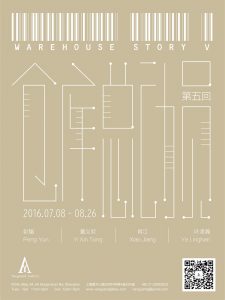 As a female artist who is active in creating video and performance art, Peng Yun has been practicing her attempt to explore the theme of awakening feminist consciousness in discussing her own sexual identity. The video “Miss Melissa and Mr Fish at 2:31 pm”presented this time is a work highly provokes people’s sense. Touching a fish without vital signs by the most sensitive part of human body – hands, turns out to be a ceremony for mutual exploration of body. In this process of interactive exploration, we can see the change from implicit and ambiguous in the beginning to vigorous and proactive in the end, which might imply the awakening and improvement in female during the exploration of their own identities.

Being a poet and a musician, Yi Xin Tong is rather an artist with multiple identities. His works can be found wandering in the context full of sensibility and romantics. The work Cry You a River over Night will be exhibited in the form of light boxes, while the title is actually a humorous reference to the 1953 torch song Cry Me a River written by Arthur Hamilton. The artist recorded the ebb and flow of a marsh creek in the Southern United States, which leads himself to a linear event that happened due to a certain will, with a poetic while melodramatic sentiment.

The narrative language in Xiao Jiang’s paintings has been dispelling and weakening the presence of himself, hence it comes out to be mature and integrated for him to explore the daily landscape in his paintings. In this exhibition, the artist will present his works that depict the most normal public space- garden, through which he sharply caught up the events and details in our daily lives that have been ignored.

Most of Ye Lingan’s works are spread out from his animation creation, which carry on strong symbol features and the fragmentation of the sense of time and space. The work 99 GODS-M is a kind of infinite cutting out and capture of the earlier series 50% Dollar in the mode of memories. The objects and signs with intentional refrentiality in these pieces make viewers directly be faced with the greedy gaze on life, death, desire, money, power and etc. The further we go into these paintings, we will just find ourselves in an artificial mysterious and insane dream which makes human beings be trapped with all these nightmare like matters that could not be got rid of no matter how we struggled.