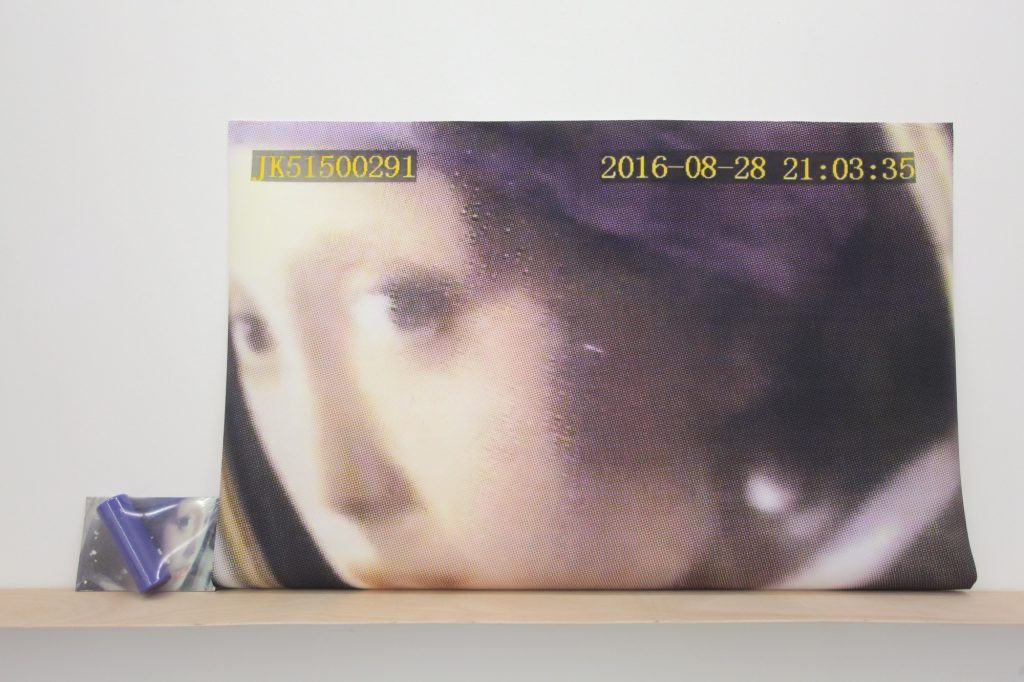 The translator is a substance placed between me and the author, it ought to be transparent at work, muted, soundless, exist in disappearance. Since any unnecessary tricks could turn one off. When plugging the adapter into the plugholes, sometimes it would make a “Pa” sound and burst out a flash of light, and pass on a vibration through the adapter to the hand that is holding it. This is not a pleasurable experience, it’s a bug that cannot be eliminated. In this whole set of motions of plugging the plug into the plugholes, this flash of light, vibration, “Pa” or “Pop” are all unnecessary dramas that let this whole set of motions imperfect. If it happens every time, perhaps we could consider it part of the motions, but it only comes by now and then to give you a shock then disappear for a while. You can never handle the rules of its recurrence, so perhaps to see it another way, that sound could be the action sound of a clapper when shooting a film: plug in your adapter, “Pa”, the next scene begins. 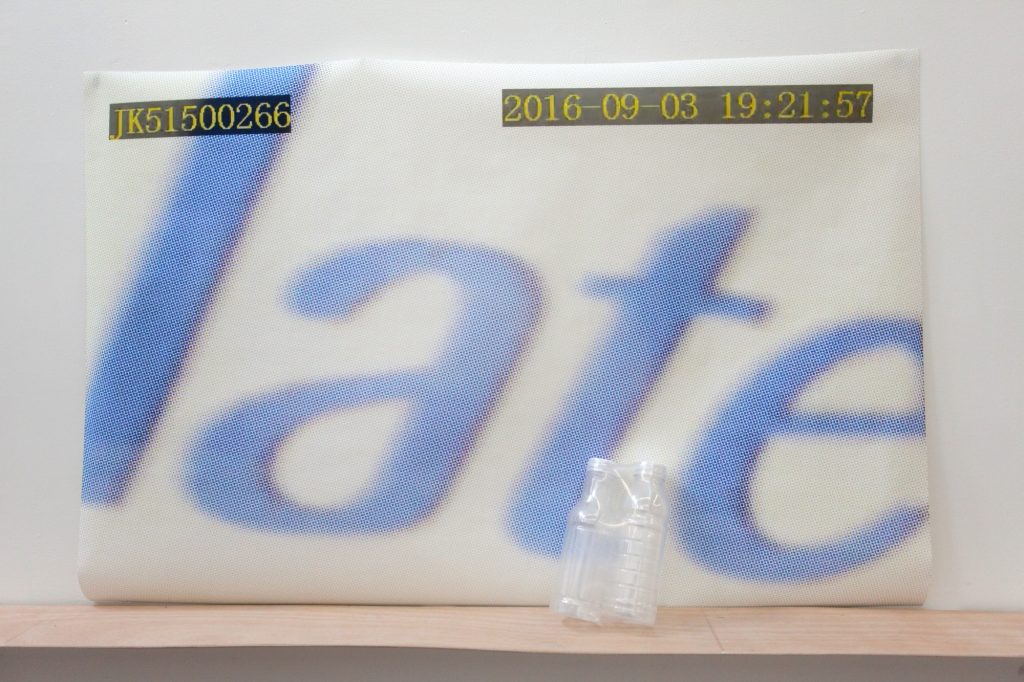 When reading a translated work, the sudden appearance of the translator is like that annoying flash. Like the footnote on page 127: ”Helianthus tuberosus, so called Jerusalem artichoke, is a kind of tuberous plant.” The phrase “so called” made me confused, does it refer to its “botanical name”? But “Jerusalem artichoke” doesn’t sound like a botanical name at all, especially comparing to “Helianthus tuberosus”. This is suspicious, but I decided to let go this unnoticeable vibration and keep on reading. Half a page after, I then picked up my phone and started the search “Helianthus tuberosus” in my browser, the first entry on Baidu Baike says: “Helianthus tuberosus, also called Jerusalem artichoke…” I then spent some time imagining how the translator translated the word, and how he typed “so” instead of “also” by mistake. Or perhaps it’s due to an error when someone at the publisher was editing the text, I don’t know how it works, anyway this “so” was passed on and appeared on the ink board of the printer, and finally came to me. Like what I said, this “so” made a “Pa” or “Pop” noise, a flash of light and a vibration that knocked me out of the novel.

These footnotes made me feel absurd, although quite a lot of effort.

I woke up at 7am on the 25th of August, began to search for something that could replace the carpet. Because the price quoted by the carpet company was too high, and I hope to use a hardened material on the floor of the exhibition hall, rather than those fluffy loop-pile materials that make no sound when you step on them. I found this PVC flooring on Taobao — glue-free self-adhesive rock pattern plastic thickened wear-resistant water-repellent non-slip flooring for home: “PVC flooring is a high-tech product of multiple layering complex structure, neither cement or sand is needed for install, weight-reducing, economical and time-efficient, this product is the ideal choice of modern decoration. A pure PVC wear-resistant layer and a PU layer are applied for protection, it has features such as wear-resistant, environmentally friendly, water-repellent, non-slip, mothproof, retardant, silent, good elasticity, easy to clean and maintain.” I read carefully about the product description, “glue-free and self-adhesive”, as long as the back tape is torn off, the material can be directly stuck to the floor. “Pressure-sensitive adhesive” appeared as “technical advantage” in the passage describing its self-adhesivity, “Easy adhesion, easy unsticking, unsticking without tearing, more the stepping, stronger the sticking.” I began to imagine the education level of the author, perhaps he was pretty proud of the poem after it’s finished, maybe even suggested some kind of perfect love relationship in it.

“Pressure-sensitive adhesive” aroused my interests, it felt unfamiliar, like the “so-called”, with a high-tech tone. This kind of vocabulary was invented exactly to make you fantasize about high-techs, just as cherries should be called “车厘子” (pronunciation of Cherries in Chinese). What does “Pressure – Sensitive – Adhesive” mean? Sensitive to pressure? In short, a kind of glue, if it can be sensitive, then it must be high-tech, bringing through an emotional quotient, it’s a product with high emotional quotient.

11A.M., August the 25th, I was reading a book on my taxi to the gallery. Page 70: “every time I finished a painting, I stick it up on my living room wall with Blutack①.” There’s a footnote added to “Blutack”, of course this is by the translator’s effort, being a translator means to judge on most readers’ knowledge levels and then to add footnotes to words by feelings. Such judgments are dubious, since no data could show how many readers will know what “Blutack” or “Brixton” is. Nobody knows where the boundary of common sense is, and there will always be people who find it unnecessary, like me, I surely know what “Blutack” is. This footnote puts me off, again, white flash, “Pa!” I need to have a look at how he explains the word “Blutack”.

“①A type of pressure-sensitive adhesive material”, my heart was paralyzed for a second like suddenly being electrified, that flash of light, that annoying lightning finally penetrated me, and this numbness spread through my whole body. At 7A.M. and 11A.M. of the same day I twice met a word that I had never encountered, this couldn’t be a coincident, it implied something, but what? My body seemed to have secreted some tiny amount of Dopamine or else, I felt a dizziness sitting in the taxi. I began to recall similar experiences: One day in my elementary school, on my way back home I craved for some stir-fried shredded pork and pepper and got home saw my mom putting a dish onto the table; last month I got an Uber whose driver was the same I got a week before; two days ago, my ex-flatmate in New York sent me a photo with the seafood market, and said “Sai Kung”, at that moment I was just leaving a restaurant called “Sai Kung Mother”; In a park I met the same beggar at the entrance and the exit, who asked me for money with the same lines… Similar coincidences appear in life from time to time, every time they appear makes me dizzy, something is being repeated: stir-fried shredded pork and pepper, Uber driver, Sai Kung, lines of a beggar… I had to investigate the feeling of this dizziness. The way we perceive time is usually linear, the repeated contents curved our perception of time. Two identical dots appear on a straight line, and perception is attempting to have them coincided with each other, the best way is to roll up the line between the dots into a loop. Thinking about this, my own memories folded up tightly, like a loop-pile carpet. My thoughts ran through this fold, perceptions started spinning, spinning made me dizzy, regardless on the physical level or the mental level. Like a drumming washing machine, a whirlpool, repetiveness makes the reality spin and dry up continuously.

Days, “alldays”, all days, the fluorescent lamp never extinguishes, 24/7. I stood in a Alldays supermarket, “loop-pile carpet” pops up in my mind. Every goods shelve was divided into X, Y, Z axis, X axis is the horizontal row: Asamu Milk Tea, Charcoal-roasted Milk Tea, Oriental Leaves, Grapefruit Green Tea, Lipton Lemon Tea, Scream, Water Power… Y axis is the vertical row: LiQu Americano, Red Bull, Carlsberg, Suntory Light… Z axis is the depths with the same products, or almost the same products, the only differences are the expiry dates on their packaging. This makes the items on the Z axis like time machines, produced today, yesterday, the day before yesterday… I took a can of Asahi Draft Beer from the fridge, this was the last one in the cell. I picked it out, like picking out a jigsaw piece from someone’s meticuously masterminded puzzle, leaving a blackhole in the picture. I was going to walk to another Alldays 500 meters away, because I wanted to see the arrangement of goods in another store. X axis: Asamu Milk Tea, Charcoal-roasted Milk Tea, Oriental Leaves, Grapefruit Green Tea, Lipton Lemon Tea, Scream, Water Power… Y axis: LiQu Americano, Red Bull, Carlsberg, Suntory Light… All the same, I had a dizziness. But meanwhile I seemed to realize something, so I hurried back to the shop before. As expected, the empty slot of the Asahi Draft Beer I picked was again filled by another can that looks the same, now this puzzle was perfect again.

There seems to be a secret ritual, replaying itself around the clock in the smallest space of a pollar day. The jigsaws of the objects are taken away all the time, and refilled again in the same manner. This rutual is carried out ceaselessly, silent and tacit. This moment of dizziness stroke me with a stronger force, every object here was endlessly repeated, every object had rolled up the sense of time, and my body was like being drawn into a lake full of whirlpools, sucked into one of them and then spewed out from another one.

Like the “pile-loop carpet”, in the convenient shops or the superarkets, reality is interweaved spirally. I recalled the time when I was wandering in Carrefour with my good friend Yin Zuofei, he stuck his hands into a rice jar, and turned his head to tell me: “This makes me feel a sense of living.” I left Alldays with my can of Asahi, because I feared I would faint before I even started to drink it. On my way home, I began to consider another clandestine means to participate in the ritual. I decided to make up a plan of actions to repeat in different convenient stores. As I thought, I stumbled down and had a tooth broken. I got up and realised what caught me up was a column-shaped segment of concrete. It’s a waste material from a drill hole. I pictured the drill spinning at high speed, water stirred with powder, turning into a grey mud and spinning in deep. This extra segment is like a solid whirlpool taken from the concrete. “Solid whirlpool”, fantastic! I brought it home. 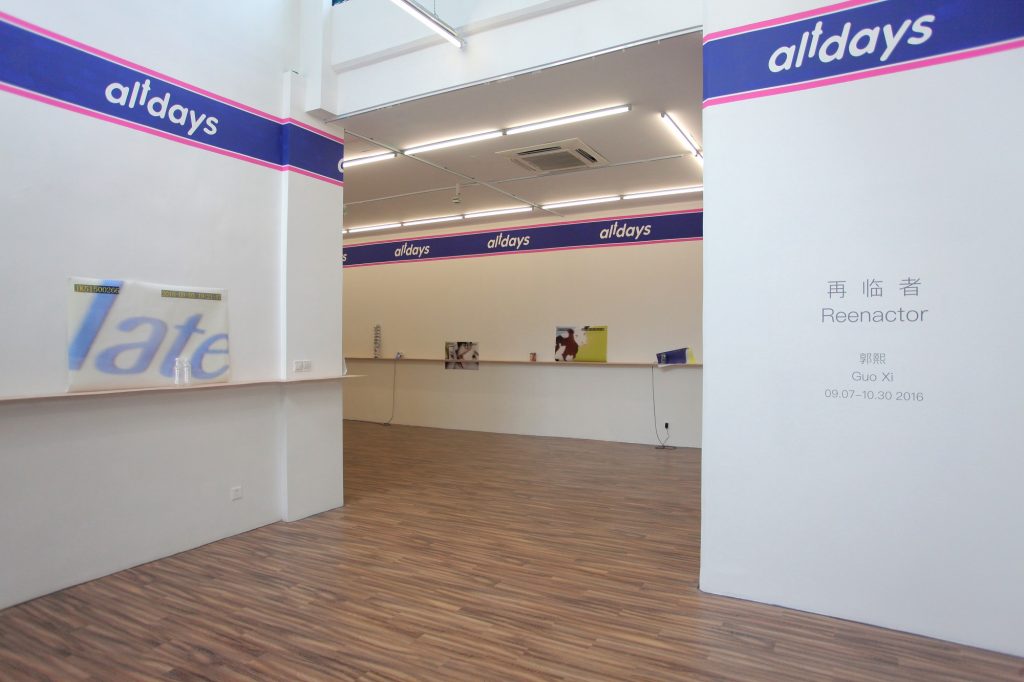 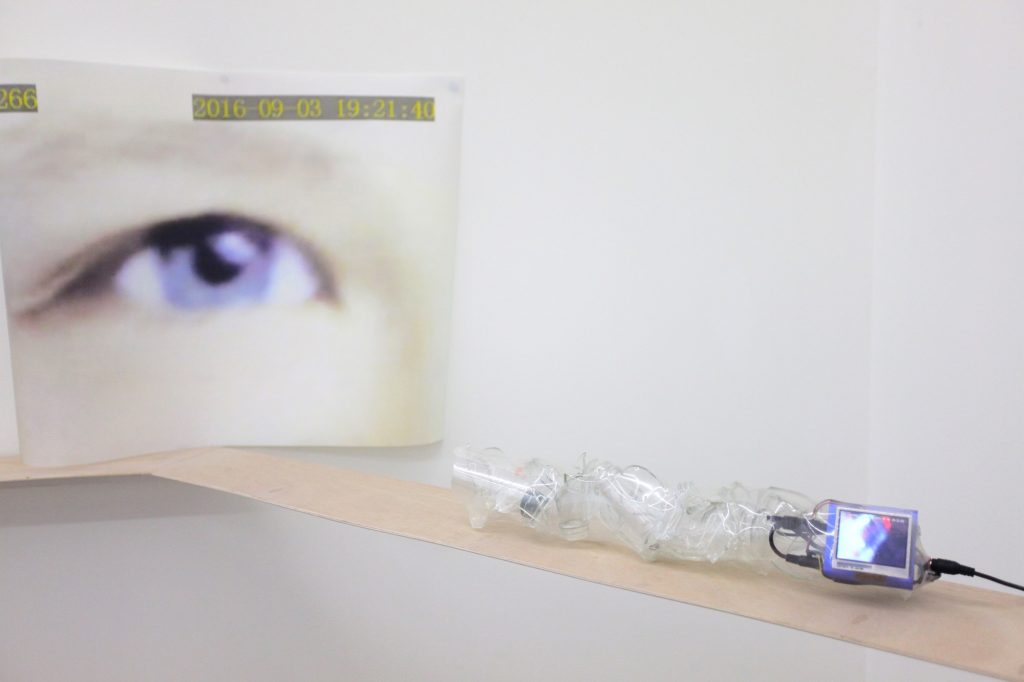