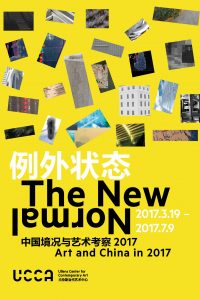 What is the place of art in China today? Or rather, in a world where the underpinnings of the post-World War II consensus have come suddenly loose, a world whose most prosperous corners find themselves in thrall to sectarian populism, a world increasingly unable to deny the changes wrought to its ecosystem by the last hundred years of human emissions, and a world in which, despite it all, China continues to grow in output and influence, what is to be done?

Coined by Carl Schmitt and expanded by Giorgio Agamben, “state of exception”—the exhibition’s Chinese title—refers to a political situation in which the normal laws and regulations of a society are abruptly suspended, replaced by temporary conditions that in turn form a new reality. States of exception have been imposed at moments of crisis throughout modern history; crisis today is constant, as ideals of freedom, equality, and openness, once held by some as universal values, fade into mass shootings, aborted ceasefires, violated norms, and tainted elections. In 2015 the Chinese leadership introduced “the new normal,” a way of talking about economic growth rates that, while lower than those of the most exuberant years of the early 2000s, continue to trump those of most other major economies. China’s assertively capitalist, globalist response to these increasingly acute dynamics—most recently typified by President Xi Jinping’s address to the World Economic Forum in Davos—might be said to form another “state of exception” in which artists live and work.

Taking the stable yet fragile reality of this evolving national condition as a point of departure, “The New Normal” includes work by more than twenty artists from China and beyond, occupying all four UCCA galleries. Continuing the institutional tradition of mounting a large-scale group exhibition once every four years begun with “Breaking Forecast: 8 Key Figures of China’s New Generation of Artists” in 2009 and continued with “ON | OFF: China’s Young Artists in Concept and Practice” in 2013, it arrays works by artists and artist groups that probe exceptional nodes as a way of examining underlying conditions. “The New Normal” is organized by UCCA curators Guo Xi, Yang Zi, Alvin Li, and Wenfei Wang working with UCCA director Philip Tinari. Li Hu/ OPEN Architecture are the exhibition architects. The exhibition will be accompanied by a rich complement of conversations, presentations, performances, and screenings, as well as a publication.

Ullens Center for Contemporary Art (UCCA) is the international institution at the heart of Beijing’s 798 Art District. Each year it presents a wide range of exhibitions and educational programs, highlighting artists from China and beyond, and encouraging the public to engage with contemporary art and culture. Opened in 2007, UCCA is a non-profit, non-collecting, non-governmental museum sustained by the generosity of numerous patrons, sponsors, members, and visitors, beginning with founders Guy and Myriam Ullens. In everything it does, UCCA aims to elaborate an inclusive, cosmopolitan vision of China in the world.

What Xi is mainly concerned with is the ideologies with which people perceive and interpret their world—specifically, the toughest-to-crack nutshell grown out of the convergence of these ideologies. By means of a dramatized sense of humor, Xi attempts to soften, or even break open this nutshell a bit, such that a trace of absurdity and uneasiness can be introduced into his audience’ s daily life. He likens an artist’ s work to an act of“piercing”, making little pores on the hard husk of ideologies, through which people will be given a chance to glance at the Truth hidden within. In his view, the visual form is but a medium for the transmission of message, and that justifies his extensive use of a variety of artistic forms, such as installation, painting, performance, sculpture, text, et cetera, to try to convey his messages as faithfully as possible.

Zhu Changquan was born in Shandong in 1989. He graduated from the Experimental Image studio, School of Inter-media Art, China Art Academy. Zhu Changquan currently lives and works in Hangzhou and Shanghai.

Zhu Changquan’s creation came from the analysis of people’s daily lives. He wants to analyze the influence of a variety of potential factors in the daily behavior to reveal the rule of daily life. He believes that the effectiveness of the image is not originating from the significance of itself, but due to their potential strength, which can release the viewer’s own experience and it can work more consciously in this big social machine. He thinks things’ development can’t be single linear, “full factor narrative” is the artist’s understanding of image creation which is to generate a new narrative form with images and everyday objects in the space through the form of drama, animation, installation, painting.