Vanguard Gallery is pleased to present “… and then we submerged in clouds” by Lam Pok Yin, the artist’s first solo exhibition with the gallery. Comprised of videos and installations, the artist’s latest series will be on view at Vanguard Gallery from September 18 through October 30, 2021.

During its early days, the World Wide Web was often portrayed as a tool that could empower and connect us by tech companies responsible for its development and commercialisation. However, such ideals and aspirations for the future have so far failed to actualise and are as if forever delayed. At the same time, we have seemingly become incapable of conceiving of a future that is radically different from the current one—they have all become the “lost futures” in the words of English writer and cultural theorist Mark Fisher. Beginning with a revisit to the history of the World Wide Web’s promotion and proliferation, this exhibition contrasts the two versions of “the present” through the lens of “hauntology” as elaborated by Fisher: the current state of intense alienation that individuals experience under the influence and control of globalized capital and its version of the World Wide Web, just 25 years after it was first popularized; and “the present” which is ceaselessly haunted by the spectres from the “halcyon” days of the early World Wide Web—ideals and hopes for the future that have never, and would likely never be realised.

In this series of works, through the act of collecting, sampling and rearranging, Lam observes and investigates the debris left behind by the early World Wide Web after its humanistic ideals had disintegrated under neoliberalism. His collections fall into two main categories: materials and “artefacts” that Microsoft produced and used to promote the early World Wide Web; and personal memories and experiences related to the internet, ranging from the collective nostalgia for the early days of the World Wide Web, to stories gathered from online workers commissioned through Amazon’s Mechanical Turk platform (MTurk), an online crowdsourcing marketplace for human intelligence. MTurk is a reflection of a reality that is dominated by “digital economy”—a form of globalized yet fragmented, network and platform-based labour: essential yet replaceable in processing of big data and the training of artificial intelligence, these individual workers, along with their working conditions and social relationships involved, are very much overlooked. This results in a concentrated manifestation of the extreme alienation in multiple dimensions. Lam has opted to uncover the structures and power relationships of the platform using its own mechanisms by actively commissioning tasks from its workers. As the artworks themselves are generated via the platform, they are inherently tied to its logic of operation, which leads to discussions about the value of labor, power relationships on technological platforms, art production and exploitation. These two categories expand respectively while remain intertwined.

“Where Do You Want To Go Today?”, the global marketing slogan employed by Microsoft to launch Windows 95, the first operating system in history to ship with an in-built web browser, ghostly banners the gallery. Works related to the first main theme of the exhibition are tied together with this rosy, evocative tagline: plaques made from expired trademarks lay scattered around the gallery space, showcasing the destinations that had been designed and predetermined for us by capital; comments and sentiments related to the collective reminiscing and reliving the days of Windows 95 are permanently burnt onto the displays of Microsoft Lumia 650 phones—the very last Microsoft phones that ran the Mobile Windows operating system, as a kind of mourning for our failure. Borrowing the metaphor of “windows”, Lam has published a task for workers on the MTurk platform: to shoot a video of the scenery outside the windows of their rooms, and give an answer to the question “Where do you want to go today?”.

The exhibition’s second overarching theme revolves around non-conventional tasks that Lam has published on the MTurk platform, as attempts to outline the anonymous workers and the conditions within the confines of the MTurk blackbox. For example, he has commissioned workers to aim their mobile phones’ camera at their switched-off monitors while slowly zooming out—until we could see their computer set-ups, workspaces and their own image dimly reflected off their screens; as a response to Amazon’s ban of using bots, scripts and other forms of automation on the platform, he has invited workers to come up with proofs that they are in fact human and not bots; he has also invited them to share their most surreal experiences they have encountered while working on the platform. The workspace videos filmed by the MTurkers are looped inside old desktop computers as screensavers, in which the workers seem to be imprisoned as heterodimensional beings; the workers’ proofs of themselves being human are loaded into various mobile phones, and exhibited in the form of a cabinet of curiosities, as evidences of what constitutes as human in our era. To further expand on the labour relationships which began with the anonymous workers on MTurk, Lam has made personal merchandises of everyday items, such as mugs, cushions and blankets, from selected submissions that he has been collecting. As visitors to the exhibition make their selections and purchases of these individual items, the economic relationships between the workers and the artist are then passed onto them. These intimate items, which bear the impressions and thoughts of these workers, shall keep reminding us of them as distinctive individuals. Disembodied voices which tell the experiences and sentiments of the workers hover and rest inside a desolated forest, and eventually merge into a virtual memorial for the remembrance of the overlooked human and labor involved in this large-scale development of a new form of intelligence.

Metaphors related to clouds and windows have often been used in relation to the Internet as projections of our visions, which reflect our relations with its technologies. The title of this exhibition, “……and then we submerged in clouds”, draws from such symbolisms and forms a timeline that weaves through the art works in the series: we were then looking at the white fluffy clouds, those which formed the backdrop to Windows 95’s boot screen, from afar, feeling a sense of unprecedented openness, freedom, and endless opportunities; whereas in the present, we are already living within the clouds, overwhelmed and obscured—we are ever more reliant on cloud computing and its platforms, yet we are often oblivious to their innerworkings, as well as the operations and power structures behind them. The virtual “windows” of internet browsers were originally seen as portals that could teleport us to the other parts of the world, yet in the case of the MTurkers, the very task of photographing sceneries outside of their room’s windows have become an exit for escaping from their virtual workplace…

Fisher’s “hauntology” indicates a non-physical existence that has exacted its effect on the present, while somehow has already evanesced or yet to be conceived. Our aspirations for the World Wide Web, which have so far failed to actualise and are as if forever delayed, have transpired into such ghosts which haunt the present—it provokes our continuous desires for the future, and rejects the draining of ourselves within the trivial reality. The exhibition, which exists as untimely workspace within a disjointed time-space, is a specific site that swings between the virtual and the real and intertwines the past and the present. It encourages visitors to examine the paradoxes posed by the development of our digital future and await the revival of their ghosts. 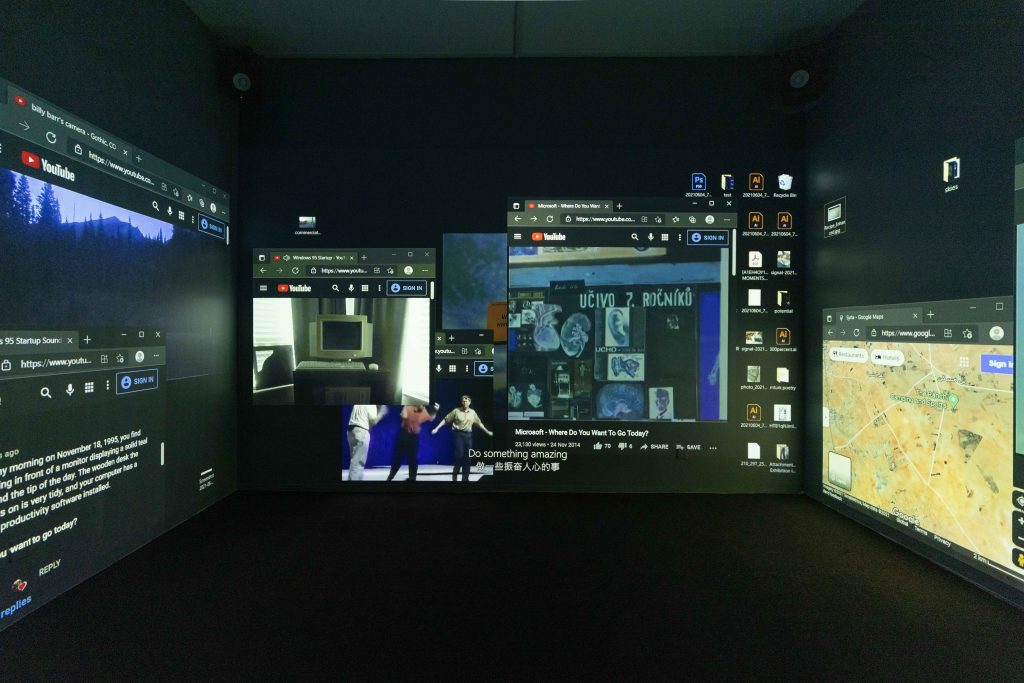 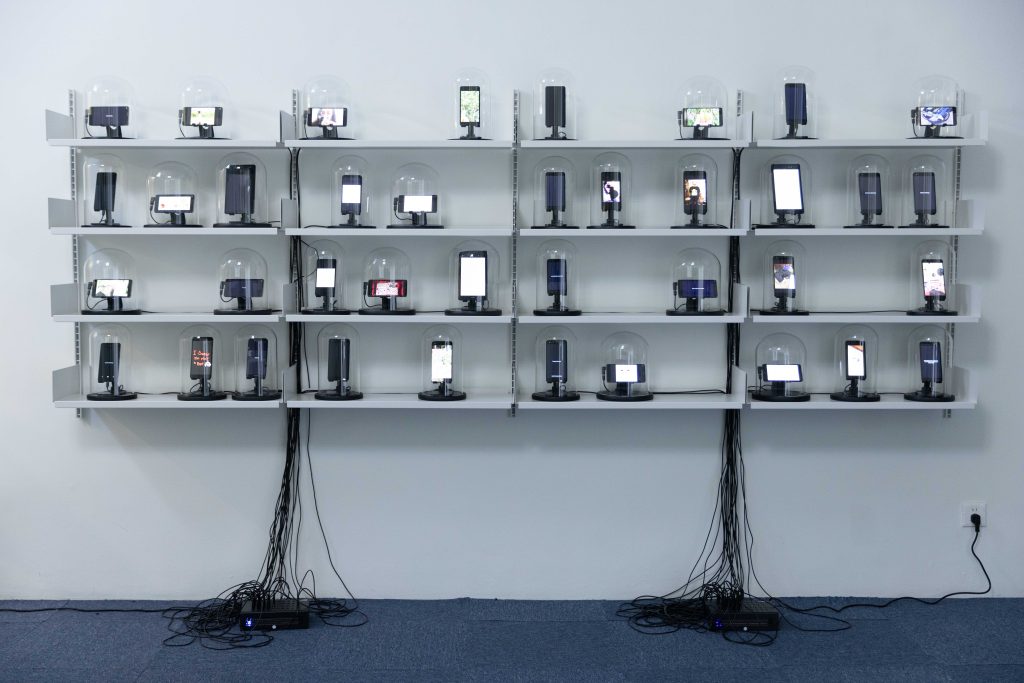 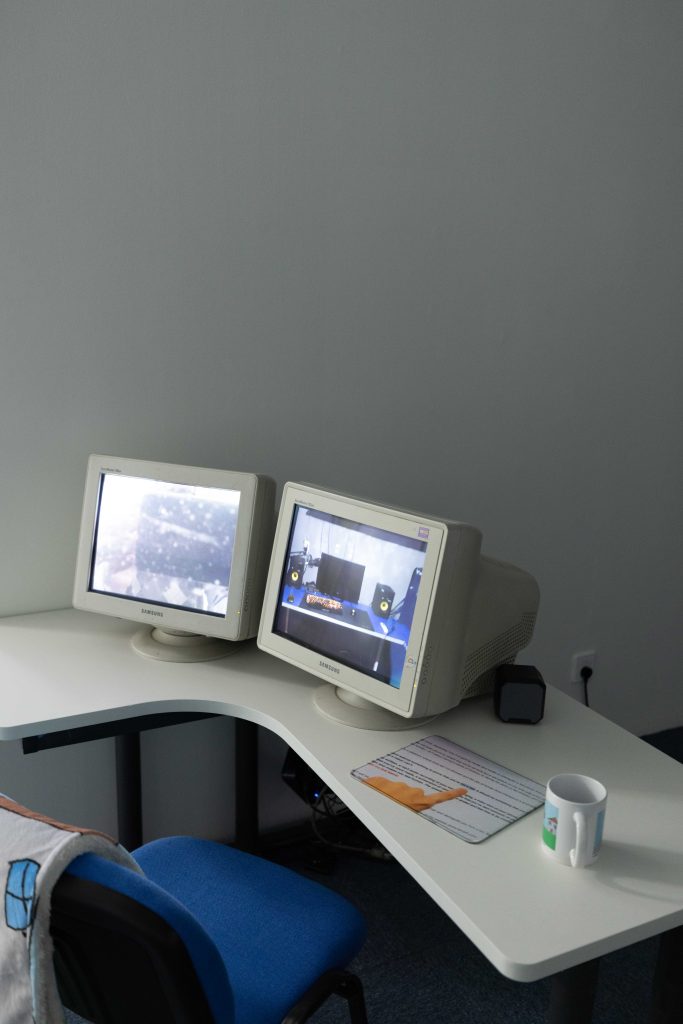 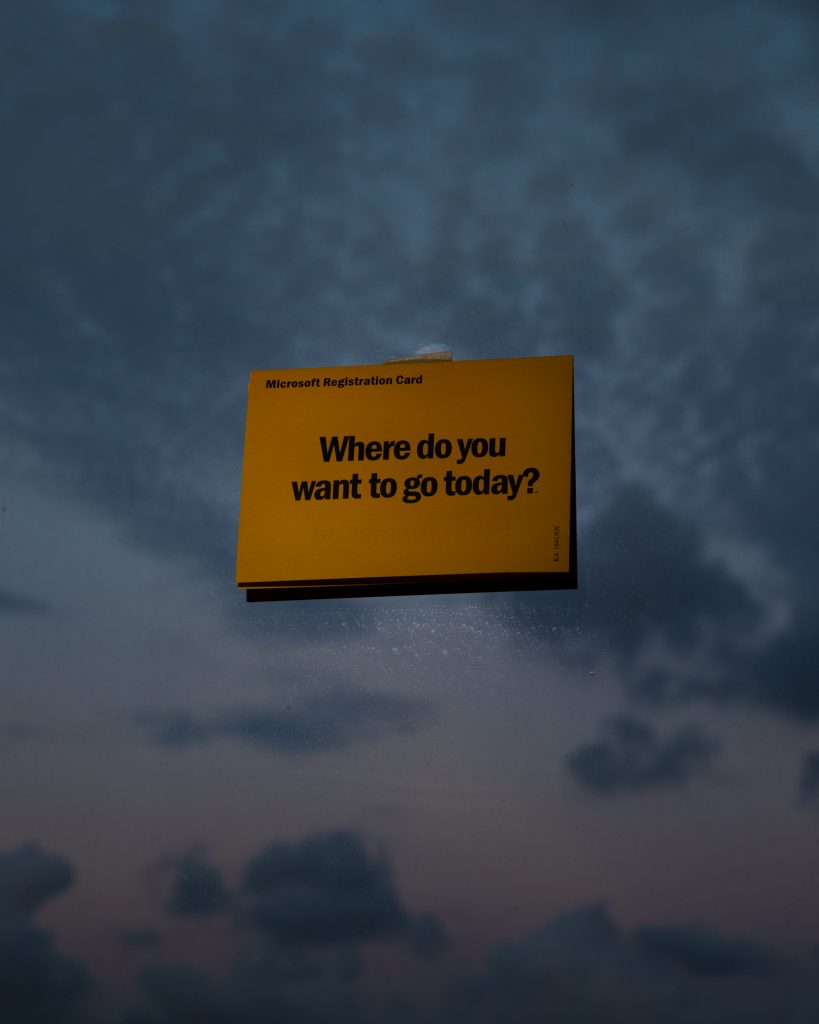 Lam Pok Yin has always kept a constant focus on the intersection of technology, media, and people. Because of his academic and practical training in architecture and photography, he is willing to re-examine and disassemble the process of image production and dissemination. Through joking, poetic, or mischievous methods, he tries to reveal the power mechanism and social construction factors behind this process. In recent creations, his long-term interest in the Internet makes his creative practice naturally transition to digital technology and the related platforms, mechanisms and logic of the data generated. Through multimedia installations, performances and texts, he uses the language of the platform itself and the research methods of “locality” to explore the political and personal implications of these technologies. In the past two years, his works have mainly focused on: (1) online labor dispatch; (2) social platforms and attention economy, and in the process reflect on the history and narrative of early Internet development.
Born in Hong Kong in 1988, Lam graduated from University of Hong Kong Department of Architecture in 2010 and then graduated from the Department of Photography, London College of Communication in 2015. His recent exhibitions are: “Bot or Not”, The Pole Gallery, London, UK (2019); “Intimacy Spills”, Barbican Arts Group Trust, London, UK (2019); Paris Photography Exhibition-Aperture Foundation Photo Book Award Finalist Exhibition, Grand Palais, Paris, France (2019); “HOTSHEET”, Downstairs at The Department Store, London, UK (2019); “40 Years of Chinese Contemporary Photography 1976-2018”, OCAT Shenzhen, Shenzhen, China (2018); “Simultaneous Eidos”, Guangzhou Image Triennial 2017, Guangdong Museum of Art, China (2017); “IMMEASURABLE: 2016 the 8th Three Shadows Photography Award”, Beijing, China (2016); “Open Call Portfolio Winner”, GuatePhoto Festival, Guatemala, Guatemala (2015); “Beyond the Camera”, Pingyao International Photography Festival, China (2015).