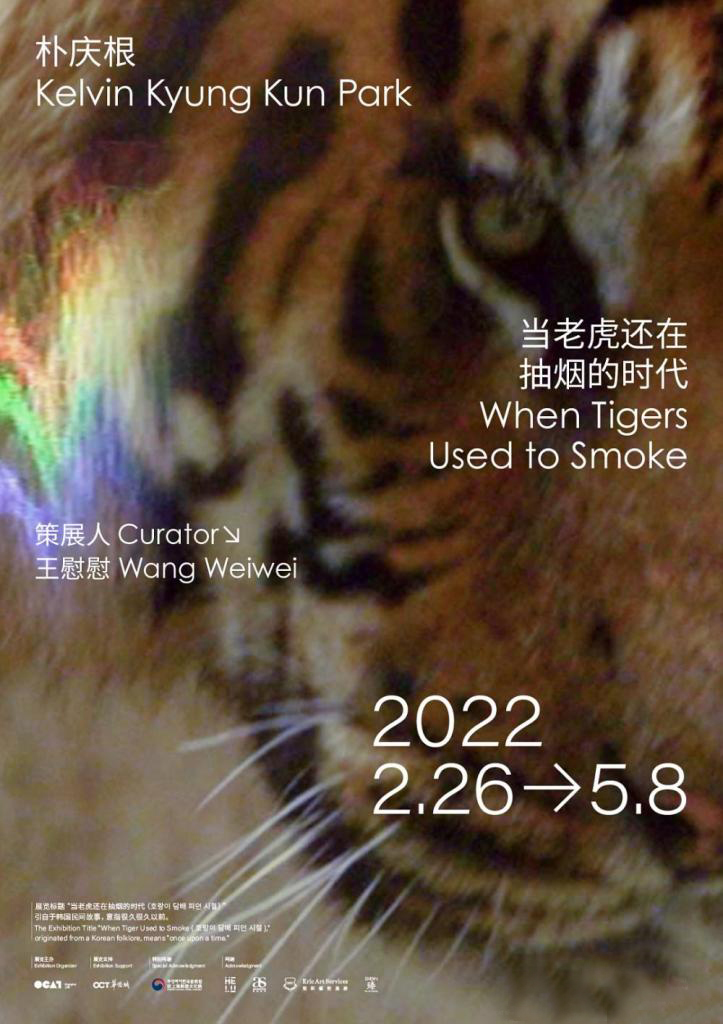 When Tigers Used to Smoke

Korean artist Kelvin Kyung Kun Park’s exhibition “When Tigers Used to Smoke”¹ at OCAT Shanghai, unfolds around the shaping of the self, taking viewers to explore the intertwined relationship between self and other in the process of continuous reflection, reversal, and reconstruction, to address anxieties of self-knowledge and identity crisis from multiple perspectives.

The exhibition will feature several important video and installation works by Kelvin Kyung Kun Park. The exhibition starts with his latest series, “Animal” (2021), in which Park attempts to dismantle the shaping process of self-perception through observing and imagining animals in action, hence re-examining the position of humans in the natural world. By applying Waveform Signal used to determine color information so that the color and brightness of the captured beasts’ bodies constantly fluctuate up and down on the XY axis, allowing the viewer to see the dismantled, fluid, and even dislocated living beings in action, thereby to re-imagine humanity in that context. The work Stairway to Heaven (2016) turns to a more personal view, exploring how politics, tradition, pop culture influence the individual’s relationship with the other and the collective, and so on, as well as how such influences internalize and disorients the self. Other important works from his early years, Cheonggyecheon Medley (2010) and 1.6 Sec (2016) both subject to imagine the relationship between human and industrial production from different perspective. The former dipicts the daily life of the residents in the area of Cheonggyecheon Seoul, where Korean industry and commerce gather. It is a euphemism for the development of modern Korean industry, revisiting the cult of collective grandeur that industry once represented in the modernization process from the perspective of digital images. The latter portrays a highly mechanized factory assembly line, imagining the mutual gaze between man and machine and man’s self-perception in the modern production and living environment.

From the issues in the steel jungle to the seemingly simple visual alienation of animals, Park always asks the viewer, and more importantly himself, the essential question of human nature from various perspectives and approaches: How do I become me? Do I really have a sense of subjectivity?