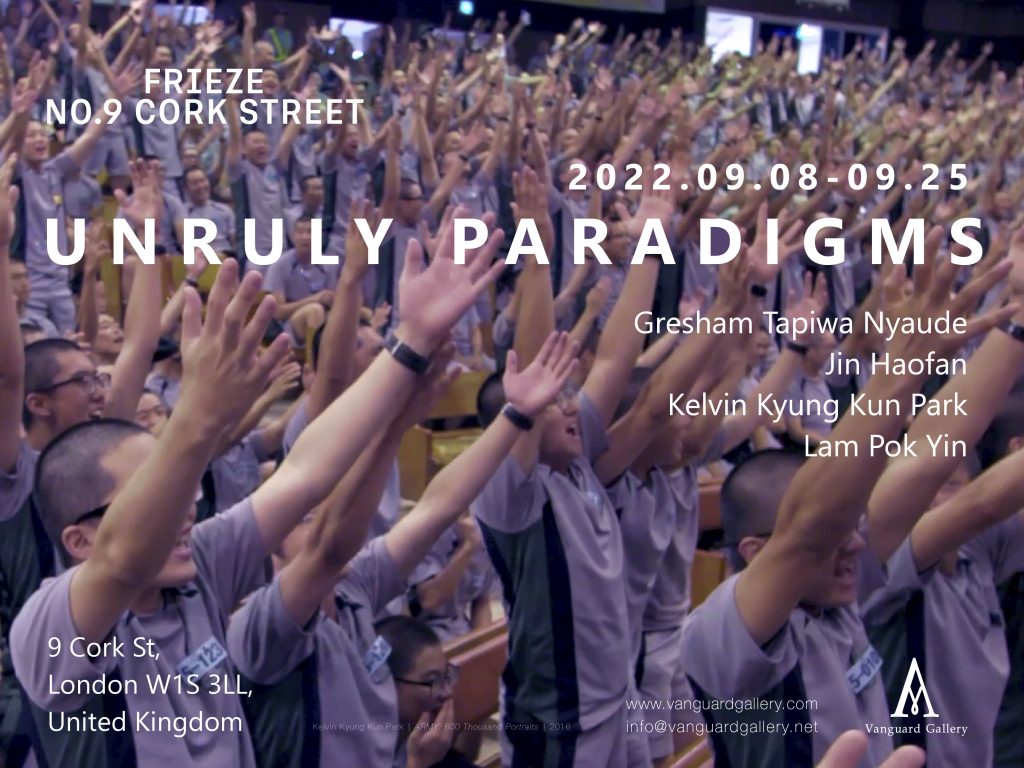 No.9 Cork Street is Frieze’s flagship gallery space. Launched in October 2021, it is a hub for international gallery residencies in the heart of Mayfair, at the center of London’s gallery district.

The exhibition brings together a series of paintings, videos and virtual reality simulations. Set in today’s world where the real juxtaposed with the unreal, the works explore the conundrums of the present and contemplate the fate of human beings towards a shared future. The four artists, distinct in their own trajectories, question and challenge authority in socio-political infrastructure, daily norm, and technological power.

Kelvin Kyung Kun PARK (b. 1978, South Korea) is an award-winning filmmaker and visual artist who works primarily in film and video, photography, and installations. His works frequently take inspiration from the cultural anxieties, myths, and narratives that inform South Korea’s identity. The work selected for this exhibit, ARMY: 600 Thousand Portraits (2016), depicts Korean soldiers who serve in the mandatory military service. The work details the intricate bodily movements and emotions of individuals who form a collective body, interpreting the military training and activities as a choreography that weaves one into a whole. The other video, Tiger Wolf (2022), was filmed during the peak of the pandemic in what used to be the busiest commercial district in Seoul. A man walks down the street looking at his phone, eating, dribbling a flat ball he finds on his walk, aloof to the apocalyptic backdrop, like an animal roaming around an abandoned city. Tiger Wolf allows the viewer to see the dismantled, fluid, and even dislocated living beings in action, thereby to re-imagine humanity in that context, and to re-examine human beings’ position in civilization.

Gresham Tapiwa NYAUDE (b. 1988, Zimbabwe) draws from the restless energy of Harare’s ghetto where he was born and raised. Nyaude’s vibrant and metaphoric images visualise the transmutation of identity and dignity, pressurised by social hierarchy and life struggles. The works in the show compose a response of Nyaude to the world at this critical moment, tackling the trauma of himself and his country with full courageousness and empathy. In this series, Tapiwa reflects with urgency on the impact that the pandemic has exerted on every facet of his surroundings and the domino emotions it may have triggered. The chair, with its connotation as irreversible patriarchy and political establishment in Zimbabwe, constitutes the dominant element of Nyaude’s creation. The figures in Nyaude’s painting defy characterization, underscored by the humanity of their quest to attain a quality of life that appears even beyond the reach of dreams. Living on the verge between survival and demise has been somewhat of a call to poetry, at times proving brutal and at others sentimental or cynically satirical. In a scenario between figuration, abstraction and hallucination created by the artist, the viewers are invited to stimulate their own solution for the reality.

LAM Pok Yin (b.1988, Hong Kong, China) has always opted to uncover the power mechanism behind the intersection of technology, media, and human beings. Through multimedia installations, performances and texts, he uses the language of online platforms and the research methods of “locality” to explore the political and personal implications of these technologies. The virtual reality installation on display, (And To Think…) This Was the Future (2021), consists of three chapters. Utilising the platform Amazon Mechanical Turk, an online crowdsourcing marketplace for human intelligence, Lam has attempted to build a virtual monument for the remembrance of the overlooked human and labour involved in this large-scale development of a new form of intelligence. The three-dimensional virtual landscape is then transformed in the second chapter into the computer desktop of the artist, showcasing assets and copies from Microsoft’s campaigns in promoting the World Wide Web in the 90s. “Where Do You Want To Go Today?” was the tagline used by Microsoft in its global marketing for Windows 95. The metaphor is leveraged and expanded in the third and final chapter, in which Lam commissioned MTurk workers to film the scenery outside the windows of the space they were in. Through the act of collecting, sampling and rearranging, Lam observes and investigates the debris left behind by the early World Wide Web after its humanistic ideals had disintegrated under neoliberalism, which in turn encourages the viewers to examine the paradoxes posed by the development of our digital future, and to reflect the draining of ourselves within the trivial reality.

JIN Haofan (b. 1987, China) ponders in his paintings the metaphysical nature of life through his saturated depiction of the alienation and glitches of the mundane. Personal perception has long been the theme of Jin’s works, and has been further explored in his latest series. Images encountered online or captured in Jin’s daily life are reconfigured and coordinated on canvas, after being simmered with his personal memories. This practice is directly reflected in the exhibited works, which are selected from the artist’s latest series currently on view at Vanguard Gallery Shanghai (“A Glance,” Jin Haofan, 9 Sept. to 22 Oct., 2022). Banana peels, anonymous figures, human organs…, every item is seemingly ordinary but serves as carrier of uncertainty which may trigger diverse individual sentiments.

“Unruly Paradigms” is a manifestation of the artists’ bold and unstrained approaches to artistic practice, as well as a statement of the gallery’s unyielding mission in supporting and developing the game-changers in global art.