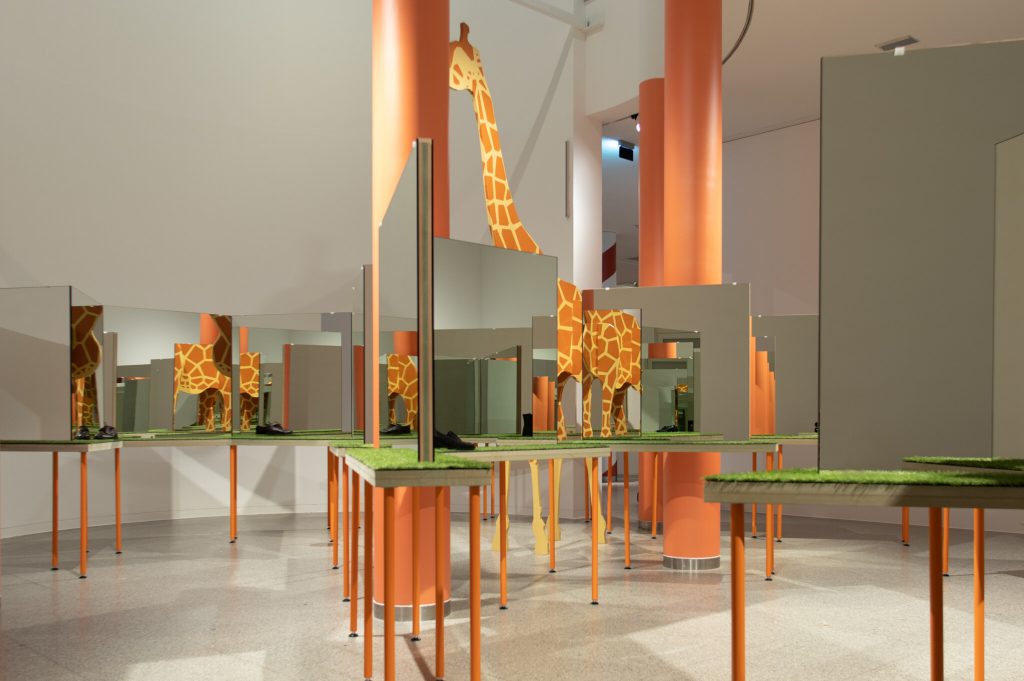 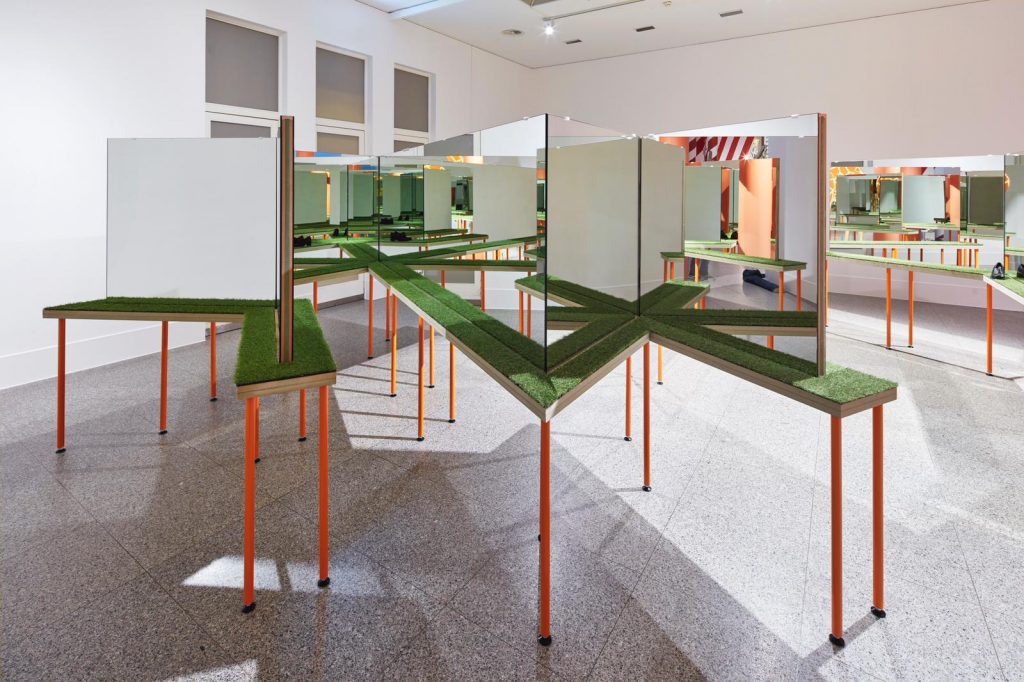 Departing from Gustav Palm’s 1893 patented mirror maze, endlessly reflecting itself, the space it installed in and the content it bears, needed to be disjointed. The maze reflects endlessly, the subject or object itself could never be aware. And this is how the giraffe came to exist in both its own world and that of an infinite reflection it itself has no awareness of. This “paradox of perception” is an age-old philosophical problem to mankind, where the mind struggles to grasp reality, but in practical terms can only generate various concepts and theories of what reality could, possibly be.

Ultimately, the mirror-maze installation “Pluralistic Ignorance” radiates an uncontrolled enthusiasm for what may initially seem an unlikely, implausible, and exclusive combination of elements and associations. The installation proposes its own kind of travesty, where unusual elements are joined – and endlessly re-joined in reflection. The term “Pluralistic Ignorance” stands for a situation in which a minority position is wrongly perceived as the majority position. One of the best know examples of such a situation being Hans Christian Andersen’s fairy tale “The Emperor’s New Clothes”, the story where two con artists convince the emperor that they make the finest clothes in all the land, that can only be seen by anyone who was not stupid. 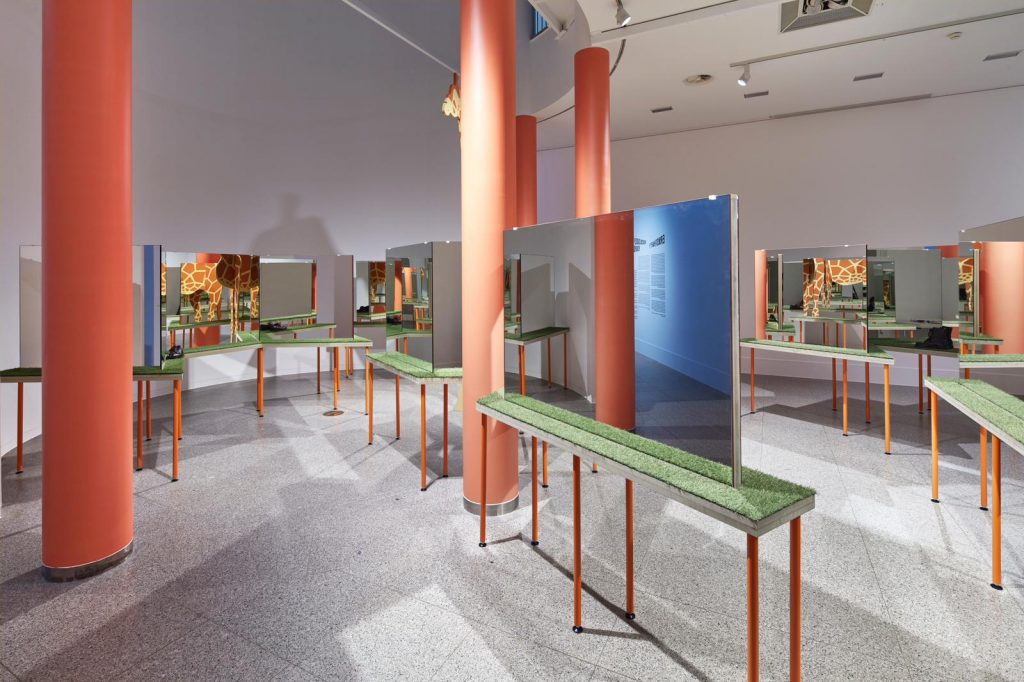 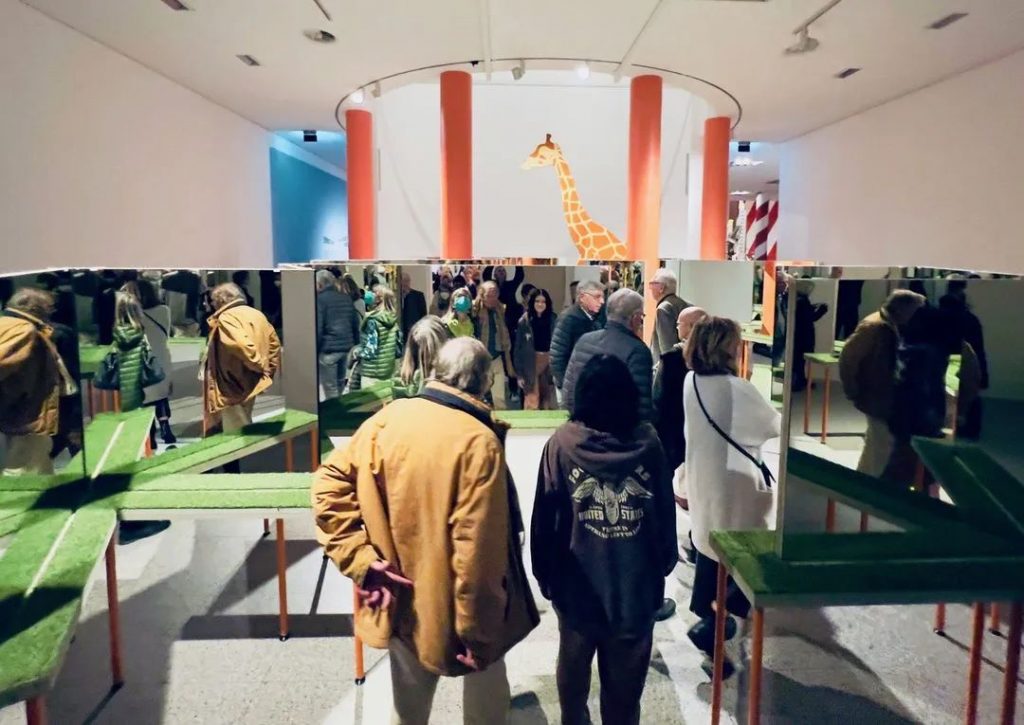 Gabriel Lester was born in 1972 in Amsterdam, where he currently works and lives. Lester has been selected to participate in international events such as 13th dOCUMENTA Kassel (2012), the 52nd and 55th Venice Biennial (2007, 2013), the 29th Sao Paulo Biennal (2010), and other international biennales in Busan, Moscow, Istanbul, etc.

Gabriel Lester’s works expand across various disciplines including music, cinema, installation, sculpture, architecture and performance. Many of his works evolve around the very nature of the media of our time, and transform the space and time through meticulously altering the media and narrative forms. Strongly influenced by cinema and mime, Gabriel Lester’s works challenge the reality of perception and stimulate on collective imagination through constructing and creating theatrical illusions.