The concept of space is always an inevitable topic regarding the development of video art. And there are at least two narrative spaces concerning all the works of such genre: one is the live shooting spot, the other the space where the video is watched by the audience. We hope, in this exhibition, to launch the topic of “spatial narrative of video works” by two video pieces created from different initiatives, in doing so the discussion of such topic can be extended from the conventional internal narrative to the multiple narratives of the external space. The works in the exhibition of the four artists, Cao Zilin, Ren Miaoqing, Tang Chao and Zhu Changquan, are about using the video as props through recording and re-editing ENEMANIA Ⅱ: Happy All The Time, a theater piece which they did last year in Hangzhou. Due to the dissatisfaction of ENEMANIA I as well the changes of their lives, an art group has been formed spontaneously to do their second “ENEMANIA”. During the play, they target at themselves, each member pointing out the weakness and flaws of the other three by video taping or oral narration on the spot, which makes all the participants as well the spectators nowhere to flee away. 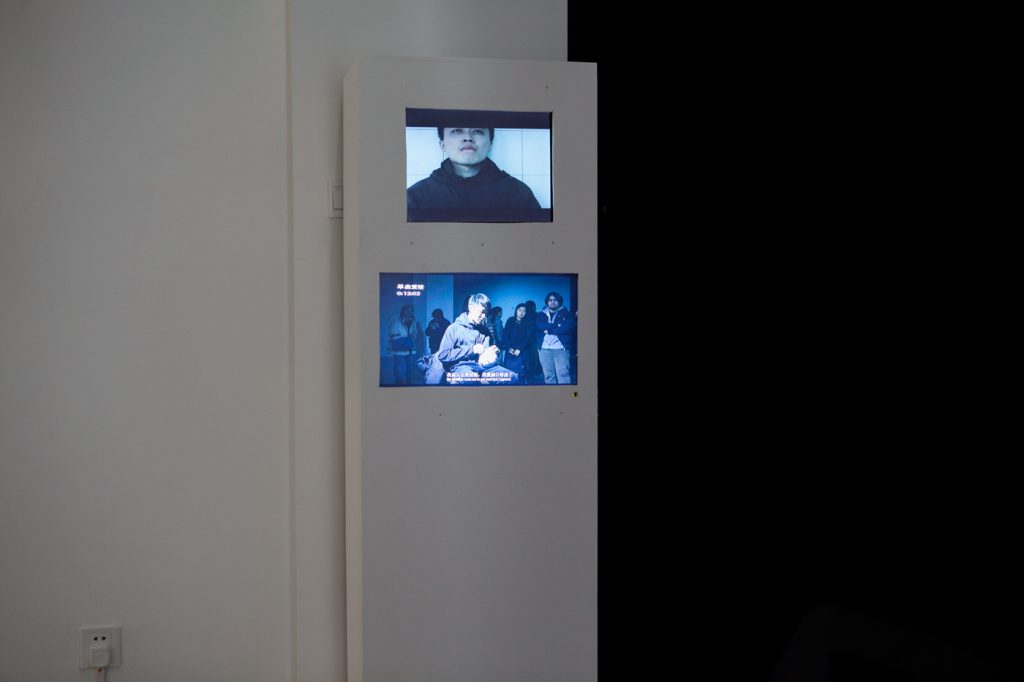 As the first piece of Mujin and DMT12’s collaboration, Shelter is a 4-Channel video installation made in memorial of the late French film director Chris Maker. Mujin presets a sci-fi story happened in a air-raid shelter by the end of World War III. The protagonists of the story would, under a wait without knowing the end, go through psycho-trauma, identity transition, political struggle as well transfer their suspicions and conflicts within a narrow and small space, where as the audience is required to step into the middle of the 4-Channel video installation and explore its narrative structure by his or her own movement even sometimes taking the place of one of the protagonists. Whether in the theater or in the video, both of the two groups of artists attempt to observe the surroundings through the subject perspectives from different protagonists. The artists, as much from the internal narrative space of the film as the live spot for video recording or the exhibition place for presentation, are striving to break the boundaries of time and space and reconstruct an interlaced “situation”. The audience would also be invited to enter the special games created by the two groups of videos as well probe deeply together with the artists into the image narrative hidden in the space.

The exhibition opens from this June 6 till July 6.