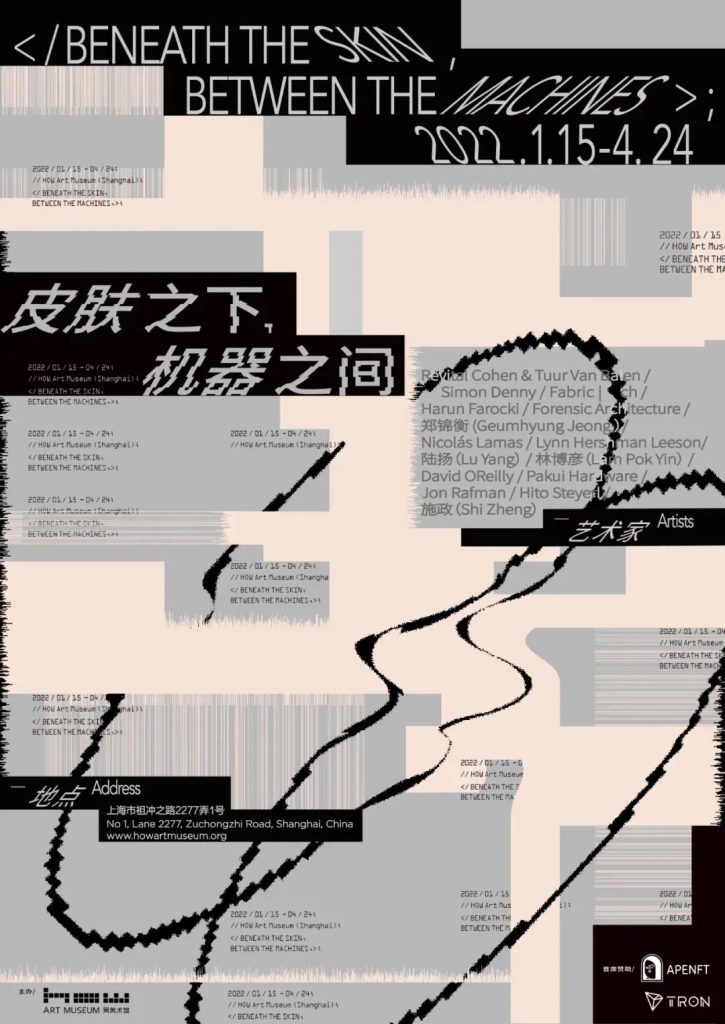 Lam Pok Yin has participated in <Beneath the Skin, Between the Machines> (Group Exhibition)

Lam Pok Yin’s video installations “(And To Think…) This Was The Future,” and “Human Workforce Superhighway” have been exhibited in the new exhibition “Under the Skin, Between Machines” at HOW Art Museum from January 15th, which is curated by Fu Liaoliao. Both of the works belong to the same series of his solo exhibition at Vanguard gallery “…and then we submerged in clouds”.

The name Mechanical Turk comes from a life-size, chess-playing contraption called “The Turk” in 18th century Europe. Its inventor claimed that it was a chess-playing automaton and used it to defeat many famous contestants such as Napoleon and Benjamin Franklin. But inside the machine actually hid a human chess master, directly manipulating the mannequin’s every move. In some sense, the device had realized a hypothetical artificial intelligence through manual means.

In 2005, Amazon first introduced the concept of ‘artificial-artificial intelligence’, in which a part of a computer program is outsourced to actual humans. They established the ‘Amazon Mechanical Turk’ platform (www.mturk.com), an online crowdsourcing marketplace for human intelligence. On this website, businesses and individuals can easily hire an on-demand workforce (Turkers) from all over the world to on tasks that computers find difficult if not impossible. Such tasks are often menial and repetitive with relatively low pay: Analysing the sentiment of tweets, distinguishing the naturalness of smiles and human speeches; in other cases, it is probably just more economical to hire online human workers instead of using computers. At the end of the day, results of these human generated answers are often used to train machine learning algorithms. The online outsourcing platform, which completely isolates work from any geographical location, has brought about a globalized labor market for human intelligence. 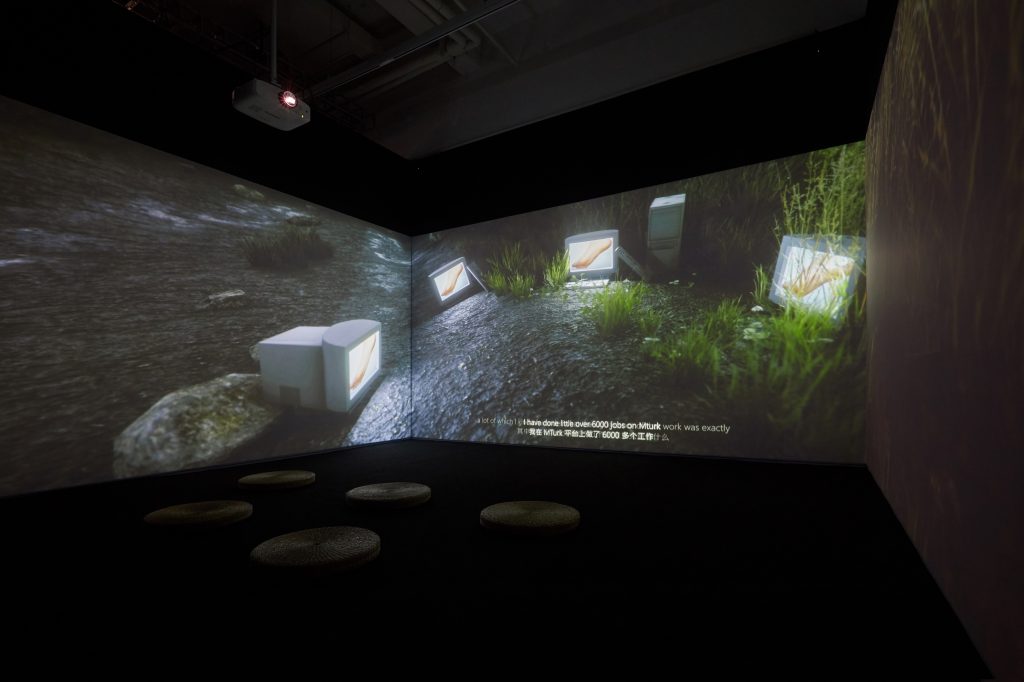 As one of the pioneers of digital economy, micro-work and crowdsourcing platforms, Amazon Mechanical Turk can be considered a comprehensive manifestation of an extreme, multidimensional form of alienation. It alienates: (i) workers from the products they produce – commissioned workers are often unaware of the identities their employers, not to mention how their inputs and data are used and what they are contributing to; (ii) workers from other workers – it is a job devoid of co-working relationships, and without the chance to generate direct connections and organization with other workers; (iii) the working environment – workers need to turn their computers and living space into the extension of the Amazon platform for work; (iv) workers from themselves – it is likely that the services generated by workers will become the material for machine learning, contributing to the AI that may replace them in the future.

In this series of work, Lam has attempted to uncover the structures within Mechanical Turk through its own mechanisms by actively participating as a requester on the platform, commissioning tasks from the workers. As the artworks are generated via the platform, they are inherently tied to its logic of operation, which leads to discussions about the value of labor, power relationships on technological platforms, art production and exploitation. 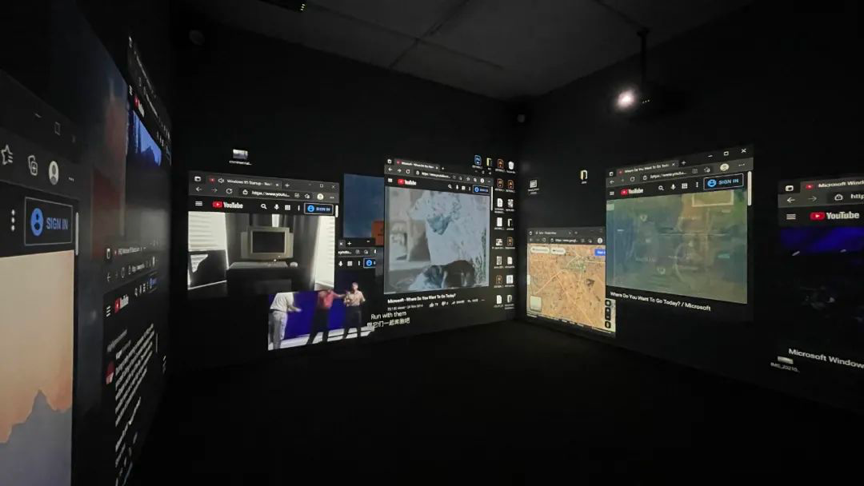 The video installation ‘(And To Think…) This Was the Future’ consists of three chapters. If the Mechanical Turk platform is a large-scale, systematic mining of the human mind, then the workers are at the forefront of this operation. Utilising the platform itself and its data, Lam has attempted to build a virtual monument in memory of the invisible labor that has often been neglected in this development of a new form of intelligence.

In the second chapter, the 3-dimensional virtual landscape transforms into the computer desktop of Lam – in which the relationship between the artist and workers, and the wider context of the work is discussed. Through looking at the assets and copies from Microsoft’s campaigns in promoting the World Wide Web in the 90s, this chapter revisits its seemingly lofty ideals and visions, which are then contrasted with the recent collective nostalgia for the early internet. ‘Where Do You Want To Go Today?’ was the tagline used by Microsoft in its global campaign in promoting Windows 95. The symbols of windows and the azure sky played a significant role in implying the unprecedented freedom, openness and possibilities made possible by the internet. This metaphor is leveraged and expanded in the third and final chapter, in which Lam commissioned workers to film the scenery outside the windows of the rooms they were in. Workers were also asked to provide their own answers to the question from 25 years ago, ‘Where Do You Want To Go today?’. The virtual “windows” of internet browsers were originally seen as portals that could teleport us to the other parts of the world, yet in the case of the MTurkers, the very task of photographing sceneries outside of their rooms’ windows have become an exit for escaping from their online workplace… 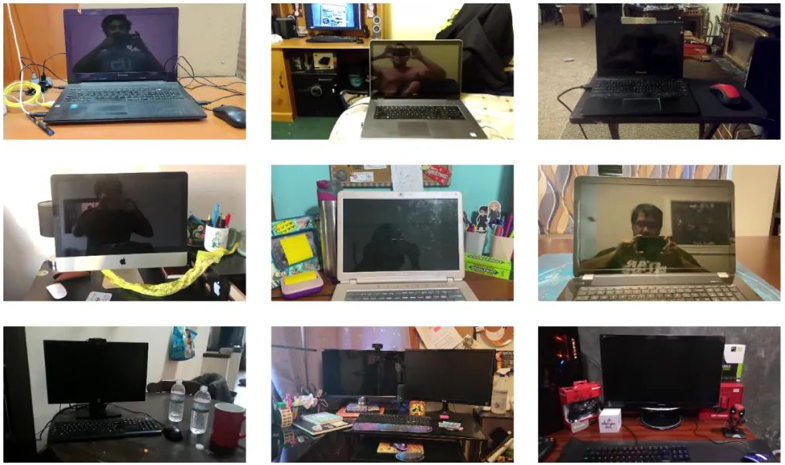 In the work, ‘Human Workforce Superhighway’, Lam has commissioned workers to aim their mobile phones’ camera at their switched-off monitors while slowly zooming out – until we could see their computer set-ups and their work / living spaces. During this procedure, the workers’ own images are also dimly reflected off their darkened screens. These videos are then looped as screensavers on dozens of computer monitors suspended inside a mirror-clad passageway, in which the workers seem to be imprisoned in another dimension within the confines of the crammed displays.